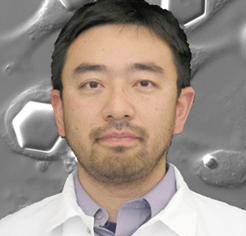 Haruki is a molecular cell biologist specializing in intracellular protein trafficking, protein phase separation, and secretory pathway organelle function. Haruki joined Amgen Seattle in 2005 and relocated to Amgen South San Francisco in 2015. During the past 15+ years in Protein Science and Biologics Departments, he has tackled a number of challenging protein expression problems and elucidated underlying reasons that made these proteins biologically and mechanistically difficult to produce at high levels. To wrestle with ‘difficult-to-express’ proteins, he has not only developed a series of cell-based diagnostic assays to probe protein folding, trafficking and secretion, but also established a battery of methods to enhance cell’s secretory capacity through cell phenotype engineering.

His current research is aimed to understand precise relationships between the type of intra-ER inclusion bodies induced by condensation-prone mAb overexpression and the kinds of solubility problems associated with such mAbs. He has been widely advocating to ‘hack’ the ER as a ‘physiological test tube’ to assess developability and manufacturability of therapeutic antibodies and other high value recombinant proteins.