We are pleased to once again share two newly published reports that highlight Amgen's commitment to our communities, and to advancing science education in particular. 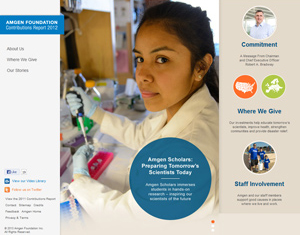 The Amgen Foundation Contributions Report includes a video message from Chairman and CEO Bob Bradway, stories of the programs supported by the Amgen Foundation, as well an interactive map that highlights the Foundation's grantees across the United States, Puerto Rico, and Europe.

Highlights of the 2012 report include:

To learn more about the work of the Amgen Foundation, visit www.amgen.com/citizenship/foundation.html 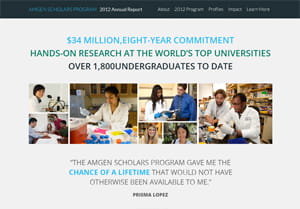 Amgen Scholars Program Annual Report, produced in partnership with the Massachusetts Institute of Technology and the University of Cambridge, provides an in-depth look at our most successful program to inspire the next generation of scientists from across the United States and Europe.


Highlights of the 2012 report include:

To learn more about the Amgen Scholars Program visit www.amgenscholars.com