Amgen's 35th: A Day of Recognition for Amgen's "Ace" and Second CEO 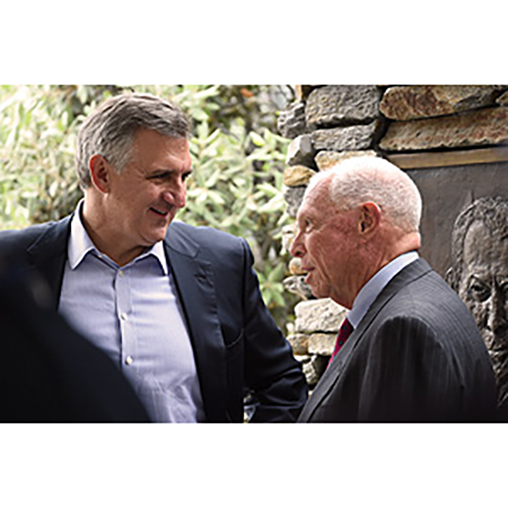 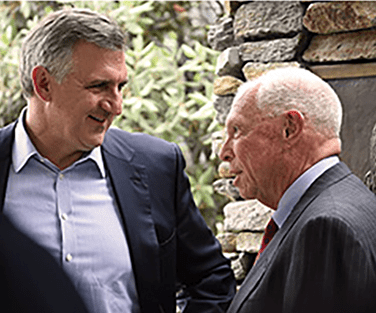 On April 24, the Amgen Thousand Oaks campus was host to a rarely-assembled group of Amgen dignitaries—a past and a current CEO, former and current board members, and former functional leaders. As part of Amgen's ongoing 35th anniversary celebration, all came to pay tribute to Gordon Binder, Amgen's second CEO and the leader BusinessWeek magazine called "Amgen's Ace."

Binder, who was CEO from 1988 to 2000, saw Amgen through remarkable early days—the launch of EPOGEN® (epoetin alfa) and NEUPOGEN® (filgrastim) and revenue growth from $91.1 million to $3.6 billion. But Bob Bradway acknowledged that Gordon's most unique, lasting contribution was the establishment of the Amgen values and the beginning of Amgen's social architecture under his watch.

"Gordon Binder was the chief architect behind the effort that began in 1994 to document the behaviors that were the foundation of Amgen's success over our first 15 years," said Bob. "Gordon realized that Amgen was a very special place and he wanted to ensure that we retained the core of what made us different and enshrined these in the Amgen values."

At a campus ceremony, Gordon's legacy was secured with the unveiling of a bronze plaque featuring his likeness and the designation of "Gordon Binder Court." Both are at a campus location that Bob Bradway said represented the "intersection of our company"— a corner bound by historic manufacturing buildings, process development facilities, and research and development laboratories.

"I think this spot is situated appropriately," said Bob to Gordon. "You had an exquisite understanding that a company is more than its parts...but is how the parts come together in service of the mission. And this space, Gordon Binder Court, is representative of how you brought together the many parts of Amgen."