America's largest and most esteemed professional cycling race, the Amgen Tour of California, ended May 17 with an exciting and extraordinarily close finish between Peter Sagan of Slovakia and Julian Alaphlippe of France. Sagan crossed the finish line a mere 22 millimeters ahead of Alaphilippe. Now in its 10th year, the Amgen Tour of California has become one of the most respected races in the world. The eight-stage, 700+-mile race has challenged the world's top professional cyclists, including Olympic medalists, Tour de France contenders, and World Champions.

While the Tour is a big, exciting event with all-star field of racers, there's a bigger mission at work here. Thanks to Amgen's Breakaway from Cancer initiative, the Amgen Tour of California has become an important platform in raising awareness of important resources available to people affected by cancer. Through their work with the Amgen Tour of California over the years, Breakaway from Cancer has celebrated hundreds of cancer survivors and their families and inspired countless numbers more.

2015 Breakaway from Cancer Champions with Amgen Tour of California ambassadors Patrick Dempsey, Joan Lunden, and Katherine Kelly Lang. Meet each of the Champions in the close-ups below. 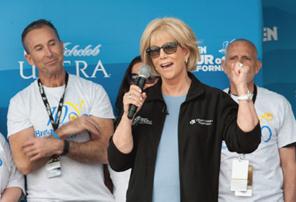 Honorary Breakaway from Cancer Champion Joan Lunden recognizes the positive impact the Champions have made in their communities at the Amgen Tour of California.

This year, after a nationwide search, ten of the most inspiring survivors, patients, caregivers, and advocates were chosen to be honored during the final weekend of the 2015 Amgen Tour of California. These inspiring Breakaway Champions have made a true impact in the fight against cancer. From raising millions of dollars for cancer research and treatments and starting their own nonprofit organizations to serving as mentors to newly diagnosed cancer patients, these remarkable men and women are inspiring leaders in the cancer race.

Breast cancer survivor and Honorary Breakaway from Cancer Champion Joan Lunden joined the ten Champions at the final stage of the race, where they were recognized for the positive and inspirational impact they have made in their communities. Champions and their guests had the privilege of watching the race near the finish line and also participated in the "Breakaway Mile," a special walk along the race course to honor the millions of cancer survivors worldwide.

Meet the 2015 Breakaway from Cancer Champions

Shelby Adams, Cancer Survivor/Advocate
The financial reality of a second cancer diagnoses led Shelby Adams (Reno, NV) into the role of advocate, fighting to get the Oral Parity Bill passed in Congress and working with Project Innovation to accelerate medical treatments for cancer patients in her community.

Mary Carrillo, Advocate/Caregiver
After losing her seven-year-old son Calvin to acute lymphoblastic leukemia in 2014, Mary Carrillo (Irvine, CA) turned her grief and pain into a life's mission to end blood cancers through fundraising, advocating for patients, and creating a foundation in Calvin's name that will assist pediatric cancer patients and their families.

Donna Deegan, Cancer Survivor
Inspired by the story of one woman who couldn't make ends meet while battling cancer, breast cancer survivor and avid runner Donna Deegan (Jacksonville, FL) created the 26.2 with DONNA, raising more than $4 million since 2008 for the Mayo Clinic and The Donna Foundation, which itself has successfully assisted more than 7,000 women in Northeast Florida covering expenses such as medical bills, mortgage payments, home utility bills and school tuition.

Elaine Eckert, Advocate/Cancer Survivor
Cancer survivor Elaine Eckert (Jacksonville, FL) is a member of Bosom Buddies and a Survivor Advocate in her hometown, where she improves the lives of women newly diagnosed with breast cancer by accompanying them to doctor appointments, acting as a second set of ears and providing endless support and encouragement.

Shawn Gardner, Advocate
In honor of his late sister who died of breast cancer, eighth grade English teacher Shawn Gardner (Alexandria, VA) started Team Heather, a fundraising group that has raised more than $500,000 and provided nearly 5,000 mammograms or 10,000 clinical breast exams, and educated thousands on the importance of early detection.

Nick Gleissner, Cancer Survivor
Just a few years after losing his brother to a rare form of cancer, Nick Gleissner (Hemet, CA) was diagnosed with a malignant and inoperable brain stem tumor that affected his speech, vision, memory and motor skills, yet with a three-wheeled adult trike and dedicated rehabilitation, he has completed 15 century rides, two double centuries and is preparing for the 2015 Para-Cycling National Championships in Tennessee.

Robert Hess, Cancer Survivor/Advocate
Inspired by his own journey with cancer, Robert Hess (Manhattan Beach, CA) founded the Prostate Cancer Awareness Project (PCAP) in 2006 to raise awareness surrounding early detection, and has since developed ProstateTracker, an early warning tool that is available online for free.

William Kenny, Cancer Survivor
Inspired by the nurses who cared for him during his battle with testicular cancer, William Kenny (Los Angeles, CA) gave up his successful career as a television writer and sitcom producer at age 30 to study nursing, and is now a Senior RN at Los Angeles Children's Hospital.

Debra Katzenberger, Advocate
When Debra Katzenberger (Glen Burnie, MD) lost her eight-year-old granddaughter to acute lymphoblastic leukemia, she set out to honor her legacy through The Kamryn Lambert Foundation, which provides help for families with children undergoing cancer treatment, including one program that has collected and delivered more than 20,000 pairs of pajamas to more than 30 hospitals throughout the United States.

The Amgen Tour of California may have ended in May, but for Amgen and Breakaway from Cancer, the race to dramatically improve patients' lives continues...

For more on Breakaway from Cancer, visit www.breakawayfromcancer.com. To read more about the Amgen Tour of California, visit www.amgentourofcalifornia.com.