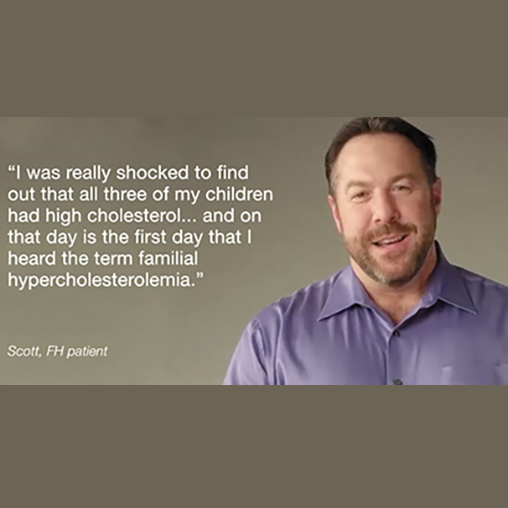 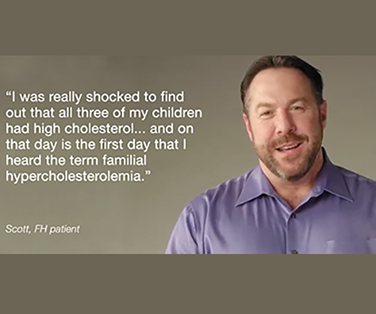 FH patient Scott, from the Message From the Heart video
To watch the video, please visit http://www.messagefromtheheart.com .

This FH Awareness Day, Amgen is proud to announce the U.S. launch of Message From the Heart, a campaign created to help raise awareness of familial hypercholesterolemia (FH).

Message From the Heart is a short film, which features stories from FH patients, relatives and physicians in Europe and the U.S., who deliver a ‘message from the heart’ about the burden of living with FH.

FH Awareness Day is a national awareness day initiated by the FH Foundation, and recognized on September 24, to help raise awareness of FH in the general public. Familial hypercholesterolemia is an inherited condition that leads to high levels of low-density lipoprotein cholesterol (LDL-C), or “bad” cholesterol, at an early age.1 People who have FH have high levels of LDL-C because they cannot remove bad cholesterol from the blood stream properly, via the liver.1 Those with FH have a 50 percent chance of passing the condition on to their children.1 But despite an estimated one million people in the U.S. with FH, less than 1 percent have been diagnosed.2

We invite you to join Amgen in educating others about the unmet need in managing FH and showing them they are not alone. Remember, early detection is key to keeping your heart healthy.

To learn more about FH and FH Awareness Day, visit the FH Foundation website at www.thefhfoundation.org .