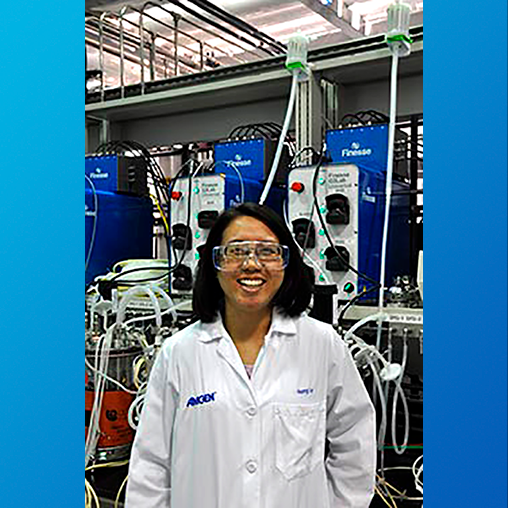 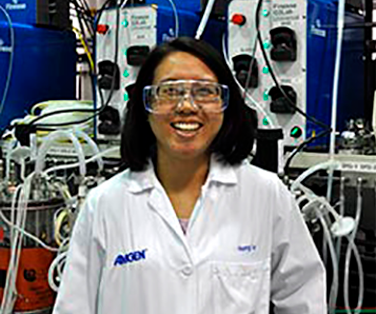 Le calls the CHO cell the black box of the biomanufacturing world. CHO or Chinese Hamster Ovary cells are the living engines of production that Amgen uses to manufacture protein-based drugs.

Amgen has had great success engineering CHO cells to consistently produce protein therapeutics of very high quality for patients. But even with this success, the way that CHO cells perform this feat is not well understood.  Le has her heart and research set on unlocking this mystery with a goal to improve the manufacturing capability of these cellular factories.

For her determination, knowledge, and groundbreaking work as an early career scientist, Cell Culture Engineering and Biogen have recognized Le. The award is given to promising scientists with less than five years’ experience in industry or academia whose work shows exceptional promise in the field of bioprocessing.

“I’m amazed to win this award; the field is very competitive,” said Le, who came to Amgen in August 2012 straight from earning her Ph.D. in Chemical Engineering from the University of Minnesota. “It can be difficult to make a real impact in the first five years after you graduate.”

Chetan Goudar, Executive Director, Process Development, commends Le for her impressive work in the short time she has been with Amgen.

“Since joining Amgen, Huong has been one of the most prolific contributors to advancing programs from Discovery Research to First in Human Clinical trials,” said Goudar. “Her unique ability to manage a heavy laboratory workload in support of Amgen’s pipeline while simultaneously conducting and publishing leading-edge research clearly differentiates her from her academic and industrial peers.”

The quest to build a better biomanufacturing engine

In order to gain greater insights into the workings of CHO cells, Le takes a systems biology approach, looking at the complex interactions behind biological processes using “-omics” tools to generate and analyze large bodies of biological data. Genomics—the study of all the genetic information in a cell—is the most well-known of the “-omics” disciplines, and has been foundational to the success of Amgen’s subsidiary deCODE Genetics in discovering key genes associated with human diseases, for example.

Compared to human genomics, CHO cell genomics has been lagging due to the lack of a public genome sequence for CHO cells until five years ago. In assessing the genomics of the CHO cell, Le is attempting to build a model to determine cellular mechanisms underlying recombinant protein production in the cells using a combination of bioinformatics tools and experiment studies. Le’s research is improving the base of knowledge and discipline surrounding the publicly available CHO genome sequences even as it advances Amgen’s mechanistic understanding of CHO cells. Ultimately, the aspiration is to have greater control over the CHO cells to make them more efficient and better production engines for the manufacture of Amgen’s therapeutic proteins.

“Imagine that you understand exactly how each gene in CHO cells works, just like how every workstation in an assembly factory operates,” said Le. “We could control the cells precisely for quality and quantity of production.”

This forward-looking research could eventually have transformational impacts on the efficiency of the work Le performs day-to-day. As her core responsibility, Le is a member of the team that generates drug substance used in pre-clinical studies for all biologics among Amgen’s numerous early stage molecules.

A more precise understanding of CHO cells at the molecular level could also bring enormous benefits for the development of commercial processes for Amgen’s innovative biologic drugs and biosimilar molecules as the company strives to bring medicines to patients more quickly.