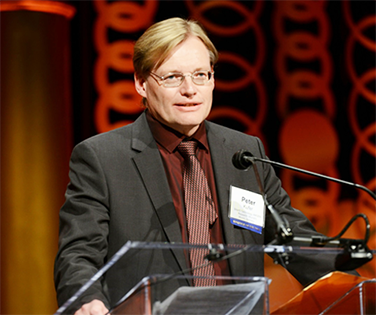 The Intellectual Property Owners (IPO) Education Foundation honored the inventors of Amgen’s BLINCYTO® (blinatumomab) and IMLYGIC® (talimogene laherparepvec) with Inventor of the Year awards at the organization’s 43rd annual ceremony and gala in Washington, D.C. in December. Drs. Peter Kufer and Robert Coffin were recognized along with inventors of other immuno-oncology products from Bristol-Myers Squibb, Genentech and Merck.  IPO described BLINCYTO and IMLYGIC as uniquely novel therapies that draw on the body’s immune system to help fight various forms of cancer. BLINCYTO is the first BiTE® (bispecific CD19-directed CD3 T cell engager) molecule to be approved and IMLYGIC is the first oncolytic viral therapy. Both new approaches show promise for patients seeking better treatments for their cancers.

IPO lauded Peter Kufer, executive director of BiTE Technology at Amgen, for the invention of BLINCYTO, along with Dr. Ralf Bargou, University of Wuerzburg, Germany. BLINCYTO is approved in the United States and Europe to treat Philadelphia chromosome-negative (Ph-) relapsed or refractory B-cell precursor acute lymphoblastic leukemia (ALL). ALL is a rare and rapidly progressing cancer of the blood and bone marrow.1,2 BLINCYTO directed at the CD19 target is the first molecule of the BiTE class that Amgen is studying to allow T cells to search and fight the tumor cells in patients suffering from different types of cancers.

“It has been extremely rewarding to contribute to the development of BLINCYTO and the BiTE Technology in order to bring this innovative medicine to patients. With BLINCYTO as proof of concept, we are investigating additional BiTE molecules to leverage the BiTE technology to help the body’s immune system target a wide variety of cancers,“ said Kufer. “There are so many talented people I want to thank who joined in on the long way from invention to drug approval and substantially contributed to the success of BLINCYTO and the BiTE Technology.  The best award for all of us is to see how BiTE molecules such as BLINCYTO help patients and save lives.”

IPO also recognized the work of Robert Coffin, current CEO of Replimune Ltd, and team for the invention of IMLYGIC, the first and only FDA-approved oncolytic viral therapy indicated for the local treatment of unresectable cutaneous, subcutaneous, and nodal lesions in patients with melanoma recurrent after initial surgery. IMLYGIC has not been shown to improve overall survival or have an effect on visceral metastases.  IMLYGIC is a genetically modified herpes simplex virus type 1 designed to replicate within tumors and produce an immunostimulatory protein called granulocyte-macrophage colony-stimulating factor (GM-CSF). IMLYGIC causes cell lysis, or death, which ruptures tumors, releasing tumor-derived antigens, which along with GM-CSF, may promote an anti-tumor immune response.

“It’s a two-pronged approach to killing cancer: one is directly killing the tumor and the other is inducing a potent vaccine effect against the cancer that can treat tumors which have not themselves come into contact with the virus,” explained Coffin in an article published by IPO.

Amgen is committed to helping patients by delivering meaningful healthcare advances to those struggling with serious illnesses. The IPO Education Foundation’s recognition of Amgen inventors demonstrates our staff’s commitment to serving this mission.

BLINCYTO is indicated for the treatment of Philadelphia chromosome-negative relapsed or refractory B-cell precursor acute lymphoblastic leukemia (ALL).

This indication is approved under accelerated approval. Continued approval for this indication may be contingent upon verification of clinical benefit in subsequent trials

BLINCYTO® is contraindicated in patients with a known hypersensitivity to blinatumomab or to any component of the product formulation.

IMLYGIC® Indication and Limitations of Use

IMLYGIC® (talimogene laherparepvec) is a genetically modified oncolytic viral therapy indicated for the local treatment of unresectable cutaneous, subcutaneous, and nodal lesions in patients with melanoma recurrent after initial surgery.

Limitations of use: IMLYGIC® has not been shown to improve overall survival or have an effect on visceral metastases.