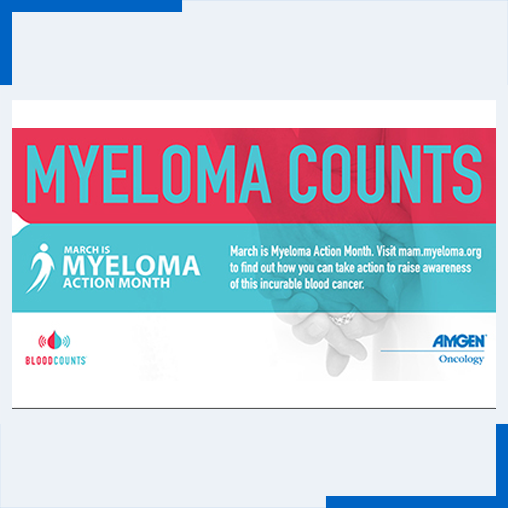 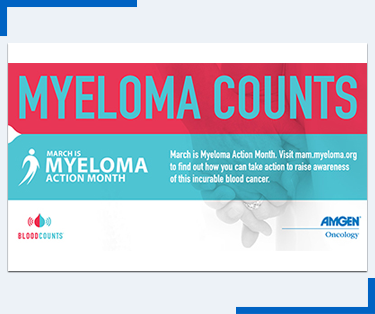 The International Myeloma Foundation (IMF) has declared March as “Myeloma Action Month,” in an effort to bring attention to a rare blood cancer that accounts for approximately one percent of all cancers globally.1

Although rare, multiple myeloma is increasingly becoming more prevalent in the U.S. due to a growing number of diagnoses.2 Despite this increase in prevalence, in a survey of more than 700 multiple myeloma patients, 83% reported having no prior knowledge of multiple myeloma before their diagnosis.3 This lack of awareness can lead to delayed diagnoses, which can have a significant impact on the clinical course of the disease.4

In recognition of Myeloma Action Month, Amgen has released the first three stories recorded and produced by StoryCorps as part of Blood Counts™, a national campaign dedicated to raising awareness of multiple myeloma. Blood Counts aims to address the gap in awareness by sharing the personal stories of multiple myeloma patients, physicians, caregivers and others who deal with this incurable blood cancer on an ongoing basis.

“Participating in Blood Counts with my husband, Michael, who has lived with multiple myeloma for 17 years, was an incredibly emotional and rewarding experience,” said Robin Tuohy, who serves as the Senior Director of Support Groups for the IMF and whose story is now online at BloodCounts.com. “At the IMF, our motto is, ‘Knowledge is power,’ which is why we wanted to share our story with the public to help educate others. We’re thankful Amgen has launched this campaign and chosen to share these stories as a part of Myeloma Action Month.”

To hear Robin and Michael’s story, and the stories of others, check out BloodCounts.com. To learn more about Myeloma Action Month and how you can get involved visit mam.myeloma.org.