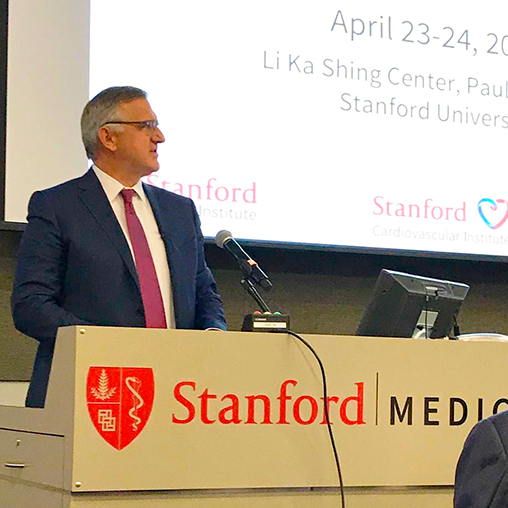 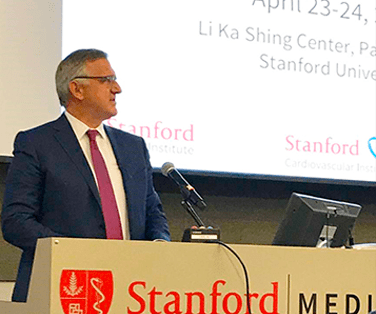 At the third annual Stanford Drug Discovery Symposium, Amgen CEO Robert A. Bradway called for a new approach to address society’s most serious and costly illnesses. He advocated for moving from a healthcare system that is “designed to fix that which is broken” to one in which we “predict who is at risk of disease and intervene to prevent that disease from arising in the first place.”

The Break/Fix Model is Broken

Bradway illustrated the current “break/fix” system by describing what happens today when someone has a heart attack.

“A state-of-the-art ambulance arrives in no time at all,” he said, “and whisks that individual to a state-of-the-art emergency room filled with incredibly dedicated and skillful physicians and nurses. They may treat the heart attack by putting in a stent or perhaps by performing bypass surgery. It’s a system in which no expense is spared to fix what is broken. Trouble is, we can’t afford that system anymore.”

Bradway noted that the U.S. already spends $3 trillion a year on healthcare – with $600 billion of that going toward cardiovascular disease. “With 10,000 people turning 65 every day in this country for the next 20 years,” he said, “that number is only going to rise, given that people over the age of 65 consume healthcare at a rate seven times higher than people under 65 do.”

Bradway said that making improvements to the current system is helpful, but not sufficient.

“Your chances of surviving a heart attack today are much better than they were a decade ago,” he said. “But somebody in the U.S. still suffers a heart attack every 40 seconds.”

Could we, instead, focus on predicting who is at risk for a devastating, life-altering event like a heart attack? And then prevent that event from happening. Increasingly, Bradway said, we can.

We have long understood, for example, that high levels of LDL cholesterol increase your risk of having a heart attack. A genetic condition known as familial hypercholesterolemia (FH) can result in LDL levels two times higher than normal. The condition affects 34 million people worldwide, but often goes undetected until it’s too late.

“We collaborated with Stanford to create an algorithm to help identify these patients,” Bradway said, “because we have therapies today to help manage their risk.” The algorithm scans electronic medical records on a large scale, identifying potential FH patients and alerting their physician to this possible condition.

Statins are an effective treatment for many patients with high LDL cholesterol levels, but not all of them. “The good news,” Bradway said, “is there are some additional therapies available for these patients, including one from Amgen.”

That medicine, Repatha®, dramatically reduces LDL cholesterol and has been demonstrated to significantly reduce the risk of having a heart attack or stroke.

“I know I’m a bit biased on this topic,” Bradway said, “but Repatha seems to be the kind of innovation that a country that spends $600 billion on cardiovascular disease should embrace. Yet the challenge remains quite significant in getting this medicine to patients.”

Bradway noted that 45 percent of high-risk patients who have been prescribed Repatha to date have been unable to get it due to unprecedented restrictions and administrative burdens that have been put in place by insurance companies and pharmacy benefit managers. In fact, a recent study estimates that these barriers resulted in more than 100,000 heart attacks and strokes that could have been avoided last year alone if these patients had been treated with Repatha or a medicine like it.

“What kind of a system is that?” Bradway asked. “That’s the system we are living with today – a system that denies access to innovative medicines for people who we knew were at high risk.

Cardiovascular disease isn’t the only serious illness that Amgen believes can be predicted and prevented.

For example, Amgen is partnering with Novartis on a potential new medicine being tested in patients with a high genetic risk for Alzheimer’s who have yet to develop cognitive symptoms of the disease. Alzheimer’s afflicts 1 in 10 people who are 65 and older and, according to the Alzheimer’s Association, early and accurate diagnosis of the disease could save $7.9 trillion in costs.

“Do we want to wait until we know we have an Alzheimer’s patient to try to fix the problem?” Bradway asked, noting that other companies are developing therapies along these lines. “Or do we want to accept that we can identify with a pretty high degree of confidence those people who are at risk and encourage them, and encourage all of us, to allocate resources to prevent that problem from arising in the first place? Ultimately, society is going to have to decide which approach we want.”

Amgen is awaiting FDA approval for Aimovig™, a new medicine to prevent migraine. The World Health Organization ranks migraine as one of the world’s most debilitating diseases given its prevalence and severity, yet it remains poorly understood and undertreated.

“We conducted a pilot study evaluating the correlation of patient activity as measured by an Apple watch and the occurrence of migraine as it is happening in real time via a migraine tracker app,” Bradway said. “Taken together, these data may be able to help us better predict when a migraine is imminent.”

Bradway made it clear that shifting to a new healthcare system will require the support of multiple stakeholders, including academia, industry, government, payers, and patient advocacy groups. He called on all those within the system to embrace change with a sense of urgency.

“When it comes to serious disease, time is not our friend,” he said. “Time matters a great deal. Time is also money and lots of it, unfortunately, when it comes to managing disease in this country.”

Bradway closed by summarizing his vision for a predict/prevent system.

“The beauty of a predict/prevent model is that it puts patients at the center of the conversation, not price,” he said. “Even if you could afford to have a heart attack, would you like to have one? What about Alzheimer’s disease, would you like to wait until your neurologist says you have it? What about migraine?

“I think the answer is clear,” he continued. “I think all of us would rather live in a healthcare system where resources are allocated to help predict and prevent disease. We think this is overwhelmingly the right direction for us to be traveling as a society and it’s the direction that we are traveling as a company.”