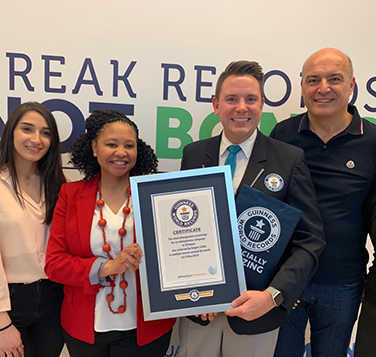 Healthcare Campaign Executed Across 10 Countries to Raise Awareness of the Importance of Predicting and Preventing Osteoporosis and Bone Fracture, Particularly in Post-Menopausal Women

Amgen, together with local healthcare partners in 10 countries around the world, set on May 5, 2019, a Guinness World Record title for the most osteoporosis screenings for an osteoporosis campaign in 24 hours. To break the existing world record, Amgen set out to screen at least a total of 3,000 people in 10 countries around the world -- to help them understand their risk of having osteoporosis, a medical condition that weakens bones and makes them more likely to fracture. The campaign took place in Brazil, Canada, Colombia, Egypt, Kuwait, Lebanon, Mexico, Saudi Arabia, South Africa and Turkey.

“Amgen is a science-based company, so it was important to us to involve the Guinness World Records organization to endorse the count of osteoporosis screenings that were conducted during our ‘Break Records, Not Bones’ health education campaign,” said Sebastian Sorsaburu, vice president, Medical, for Amgen’s Intercontinental Region. “While it is exciting to have set an official Guinness World Record title, it is even more rewarding to know that we raised awareness of the serious risk of bone fracture associated with osteoporosis, particularly among post-menopausal women.”