Go Behind the Scenes With Groundbreaking Neuroscientist Cen Xu

A Q&A with the lifetime achievement award winner who led the development of Amgen’s first-in-class migraine medicine. 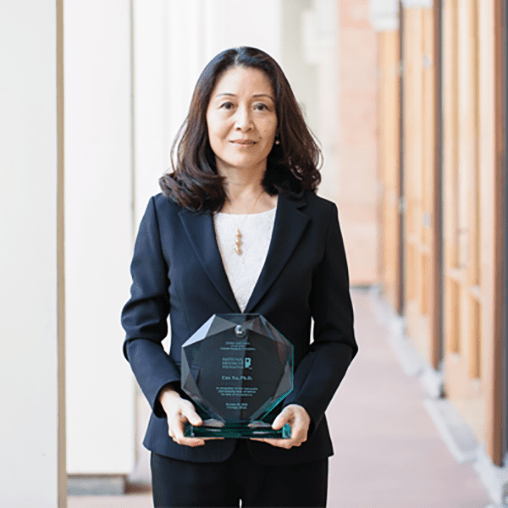 Amgen’s neuroscientist Cen Xu is no stranger to recognition for her groundbreaking work on the development of Amgen’s migraine medicine Aimovig® (erenumab-aooe). After Aimovig launched, it was named one of Time magazine’s top inventions of 2018. Xu also received the Health Industry Visionary Award by the Society for Woman’s Health Research, and inside Amgen, Xu received both the George B. Rathmann Award for Scientific Excellence­ and the David L. Lacey Award.

On Saturday, Oct. 24, Xu also received the prestigious lifetime achievement award from the National Headache Foundation (NHF), joining an elite group of neuroscientists recognized for their work to help patients living with headache and migraine disease.

In the lead up to her virtual award ceremony, we sat down with Xu to learn about her first introduction to neuroscience at a mental institution in China, how she wound up at Amgen leading an underdog migraine program to a first-in-class medicine, and why she thinks the potential for neuroscience to help patients is just getting started.

When did you first became interested in science, and how did that lead you to neuroscience?

I grew up in China, where my father was an engineer and college professor, and my mother was a teacher. I was naturally attracted to science and STEM, but when I graduated from college, I didn’t know what I wanted to do. So, I took a break from going to graduate school, which was kind of rebellious in my family, and I got a job with a research group attached to a mental institution. Living there, I could hear the patients screaming at night from across the courtyard. My college roommate’s boyfriend was diagnosed with schizophrenia and he ended up in that institution, so I saw firsthand how that impacts someone's life. I also saw that some of the treatments available were things that we consider inhumane today, and that was my first introduction to neuroscience.

Where did get your start in drug discovery?

I came to the U.S. to get my PhD, and I got my first job in the neuroscience department of a large pharmaceutical company based in Connecticut, where I spent the first few years of my career working with a team that licensed a drug that remains a standard of care for schizophrenia today. This was a medicine for the same type of patients I had been living with at that mental institution, who were previously getting treatments like insulin and electroconvulsive therapy. That experience showed me how drug discovery can have a powerful impact on patients’ lives.

Why did you come to Amgen?

A recruiter called and asked if I was interested in moving, and I said no at first, but he convinced me to come out to Thousand Oaks, California [Amgen’s headquarters] for a visit. The passion for innovation here is what really attracted me to Amgen. At one point I asked, “If I propose a target that is so new that no other companies are working on, what would you do with it?” They all said at once: “We’d love to go for it.” At my previous job, if I had proposed a target that no other big pharmaceutical companies were working on, they’d say I was out of my mind.

How did joining Amgen lead to the discovery of the molecule that became Aimovig?

I started working on migraine before coming to Amgen. At that time, several companies were already working on the small molecule calcitonin gene-related peptide (CGRP) receptor antagonists. I was initially attracted to it because of the unique molecular structure of the target. Then when I started talking to the headache specialists, I realized how serious the need was for these migraine patients. When I came to Amgen, I was delighted to find out that we also had a CGRP effort exploring several different modalities. Given the state of competition, we shifted away from the small molecule, terminated the peptide program and focused on creating an antibody instead. Technologically it was super challenging to make an antibody against the CGRP receptor. But Amgen scientists are the antibody experts, so I figured if anyone could do it, it would be Amgen.

Was there an “aha” moment in which you realized this molecule had the potential to become an effective medicine?

May 8, 2008 was a special day in the history of Aimovig. I can still remember that day, and it gives me goosebumps to talk about it. After several months of anxious waiting, the screening of binding antibodies had identified many good hits that were almost hard to believe. The next key step was the confirmation of their functional activity and selectivity. I had an excellent associate who took about 35 antibodies into the lab for a whole week, and at the end of that week he walked into my office with a big smile on his face. I was there with another director, a pain expert and long-time drug discoverer, and when we saw that data, we looked at each other and said, “we have a human therapeutic here.” It was amazing.

Do you know people who suffer from migraine, and how has that influenced your work?

I have known so many friends and colleagues who live with migraine, and they are all fighters trying to manage this disease. There was one biologist on my team who really suffered from migraine, and I could see how her migraine days affected her and her ability to go to work. I often told my team that we were doing this for her. After Aimovig launched, and she was able to get it prescribed, I didn’t hear from her for a few months. I’m always nervous when people I know get Aimovig because some people are non-responders. When I finally heard from her, she said she wanted to make sure it was real because it had really impacted her life. She told me she was having fewer monthly migraine days and she had just applied for a director job. It’s a tremendous relief in my mind to know that Aimovig works for many patients.

Last year's NHF lifetime achievement award winner was Eric Kandel, who also won a Nobel Prize. How does it feel to be in that company?

I can’t say how honored I feel to be in the company of scientists like Eric Kandel. At the same time, it’s a little intimidating to get a lifetime achievement award. There’s a lot of work left to do. It feels like I’m closing a chapter.

What do you find most exciting about the future of neuroscience drug discovery?

I really like problem solving, and the brain holds some of the biggest puzzles for us to solve. There are still huge unmet needs, and I’m excited to see how new technologies and emerging knowledge can help address issues like neurodegeneration in aging populations. We also can't underestimate the intertwined relationship between the neuronal system and the rest of the body. I think we’ve barely scratched the surface of what’s possible, and I can’t wait to see what happens next.

Aimovig® (erenumab-aooe) is indicated for the preventive treatment of migraine in adults.

Contraindication: Aimovig® is contraindicated in patients with serious hypersensitivity to erenumab-aooe or to any of the excipients. Reactions have included anaphylaxis and angioedema.

Hypersensitivity Reactions: Hypersensitivity reactions, including rash, angioedema, and anaphylaxis, have been reported with Aimovig® in post marketing experience. Most reactions were not serious and occurred within hours of administration, although some occurred more than one week after administration. If a serious or severe reaction occurs, discontinue Aimovig® and initiate appropriate therapy.

Constipation with Serious Complications: Constipation with serious complications has been reported following the use of Aimovig® in the postmarketing setting. There were cases that required hospitalization, including cases where surgery was necessary. The onset of constipation was reported after the first dose in a majority of these cases, but patients also reported later on in treatment. Aimovig® was discontinued in most reported cases. Constipation was one of the most common (up to 3%) adverse reactions reported in clinical studies.

Monitor patients treated with Aimovig® for new-onset hypertension, or worsening of pre-existing hypertension, and consider whether discontinuation of Aimovig® is warranted if evaluation fails to establish an alternative etiology.

Adverse Reactions: The most common adverse reactions in clinical studies (≥ 3% of Aimovig®-treated patients and more often than placebo) were injection site reactions and constipation.