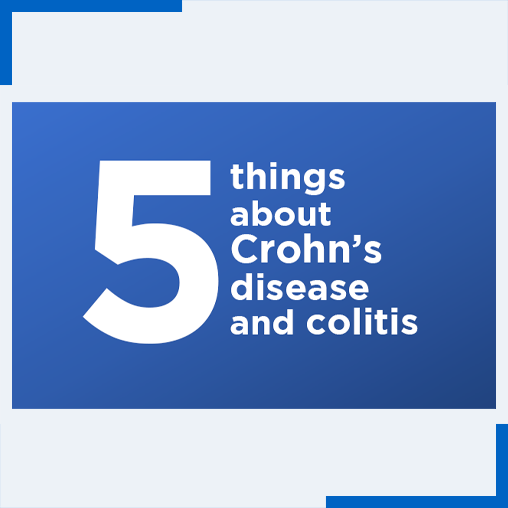 Inflammatory gastrointestinal diseases like Crohn’s disease and ulcerative colitis impact the lives of millions of Americans, and every patient faces their own journey to find a treatment plan that works for them. The Crohn’s & Colitis Foundation works year-round to advance research, advocate for patients and provide community support including education for anyone affected by these diseases.

December 1-7 is Crohn’s & Colitis Awareness Week, and this year, Amgen is joining the Foundation to help drive awareness and raise money to support patients living with Crohn’s disease and ulcerative colitis. To start, we’re sharing five important facts you might not know about these chronic inflammatory diseases.

1. They are similar — but not the same

2. The causes remain a mystery

As with most chronic inflammatory diseases, there is rarely a single, identifiable cause of Crohn’s disease or ulcerative colitis. The Foundation states that family history and genetics may be one of the clearest risk factors and that, “between 5% and 20% of people with IBD have a first-degree relative, such as a parent, child, or sibling, who also has one of the diseases.” Cigarette smoking is also a common risk factor, and it’s possible that environmental factors play a part, as IBD is more prevalent in developed, urban areas.

3. They're more common than you think

The Foundation estimates that more than 2 million Americans currently have either Crohn’s disease or ulcerative colitis. Among Americans diagnosed with IBD are celebrities like actress Shannen Doherty and past U.S. president and Army general Dwight D. Eisenhower, who underwent surgery for Crohn’s disease while serving in the White House. People can join social media influencers like Tina Aswani Omprakash from Own Your Crohn’s (@ownyourcrohns) to help spread awareness about Crohn’s and colitis by sharing their stories on social media with the hashtag #IBDvisible.

4. No cures exist, but treatment options are growing

While there is no cure for Crohn’s disease or ulcerative colitis, and not all medications work for all patients, many people are able to manage their disease with a combination of lifestyle changes and medications, which may include biologic therapies. The availability of biosimilars — biologic products that are highly similar to, and have "no clinically meaningful differences" from, already approved biologic medicines — have led to greater availability and access to treatment options for patients.

5. A healthy lifestyle can help

Biologics, biosimilars and other medications are only part of a comprehensive treatment plan for patients with Crohn’s disease or ulcerative colitis. Many patients also find that lifestyle can play an important role in managing these diseases, as factors such as stress, anxiety, depression and malnutrition may contribute to poor quality of life. To encourage active, healthy lifestyles for patients, and support fundraising efforts for research, Amgen will be a sponsor of the Foundation’s virtual Spin4 Crohn’s and Colitis Cures event, taking place on December 5. Register a bike to ride along, and make sure to visit Amgen’s virtual booth during the event.